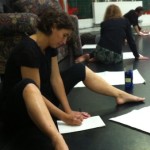 Mostly this month I will be directing two bold new street theatre projects by lovely people.  One is for Ramshacklicious and the other is a collaboration between Soap Soup and Lady Strong’s Bonfire.

Making a street show is great fun but differs from directing indoor shows in a bunch of ways, the main one being the number of variables over which you have any control…Due to its very nature, the show is never really, fully rehearsed or ‘complete’ until it has been out in real, live weather, in real, live settings and played with a real, live audience…  These elements may seem obvious, but they pose huge considerations for the making processes and performance structures. Sure, the research phase can map the relevant territory, the devising/creation period can generate a body of content and anticipate what will happen in response to a number of variables and the rehearsal period aims to give the performers some sense of confidence and control over their offering, whilst leaving lots of room for the audience’s responses and input.  In reality though, it is like making a show in which half the cast and technical requirements are added during the dress rehearsal;  the work does not really fulfil itself until it has had a good innings out in the world.

This is the beauty and the challenge of street shows. And why improvisation remains a strong element for me as a director.  For street work, I tend to help artists build the performance as a series of game structures or semi-improvised ‘scores’ within which the performer can play.  These will include text, action and rules that serve the content but within which (nearly) any eventuality can be accommodated.  The order of these may need to happen sequentially (if there is an important narrative arc, for example) or can happen in a more modular way that responds to the reality of the here-and-now performance conditions. This way, we can build the strongest material possible without the need to have total control and whilst leaving lots of room for the work to remain responsive both to the audience and the built and natural environment within which the work is performed.

In Spores, a production with Angelhouse, we took this approach to its furthest extreme.  In this, we relied primarily on spatial and impulse-led improvisational structures and took the idea of street games into abstract, yet still very playful and responsive territory.

In light of all of this, I’m happy to confirm that I’ll be back on the street soon myself with Open the Door— a street game structure with instant drawing and improvisation that I developed for Playing Out with Jenny Sanderson, Pete Goddard and Mandy Rose.  This time, Jenny and I will be joined by performer and illustrator Sarah Corbett (she’s the one in the photo).  I’m looking forward to revisiting this project during some of the upcoming Make Sunday Special events in Bristol.