Adventures in Autonomy and Heteronomy… 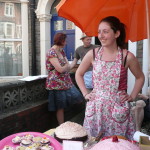 I have often felt frustrated at what I’ve experienced as an unfortunate but avoidable mis-match between the sophistication and depth of the processes so often involved in participatory and community arts projects and their resulting products (be they exhibitions, performances and so on).   Because this matter has recently come up in a few conversations, I thought it might be timely to revisit my thinking on it.

Below, I revisit “Adventures in Autonomy and Heteronomy; Dialogical Aesthetics and Community Theatre/Performance”, an essay I wrote during my MA at University of Exeter, in which I attempted to wrap my head around this particular vexation.  In it, I examined several Bristol-based case studies within the context of Grant Kester’s very useful framework from his book Conversation Pieces.

Kester was one of the first (that I’m aware of) to thoroughly unpick the problem of how most conventional aesthetic frameworks do not serve us very well when applied to socially engaged and participatory works.  He writes

As I began to investigate this work it became apparent that I would need to re-evaluate some of the normative assumptions of art criticism and art theory. Aspects of these projects simply cannot be grasped as relevant by conventional art critical methodologies. Mainstream criticism focuses on the formal appearance of physical objects, which are understood to possess immanent meaning, and the critic’s judgments, which are authorized by their individual, pleasure-based response to that object.

To which I respond:

“I wonder whether similar ‘normative assumptions’ may also affect our ‘reading’ of aesthetics within theatre. Indeed, conventional theatre criticism is based on such a reading of performance from the perspective of the audience member–as a passive spectator–in response to a theatre product or ‘object’ (the script, play or even the actor). Furthermore, when considering the elements of participation and process that are central to most community theatre/performance activity this model seems particularly ill suited. These ‘normative assumptions’ may also explain why discussions of community theatre/performance often sits more comfortably within social and education theoretic frameworks rather than ones relating directly to art and theatre.

Kester’s critical framework for dialogical practice resonates with this assertion and proposes two significant developments. The first is a change of the locus of the aesthetic experience from the instantaneous, responding to a physical product/object, to the durational, sited in and responding to a dialogical process rather than to a product (Kester 2004: 12). The second is a reconsideration of the long-held (and problematic) ideological condition of the ‘authentic’ artist as necessarily autonomous (self-governing) and whose ‘art exist[s] independently from the conditions of its making’ (S. Jackson 2011, 31). This ideal is confronted (and confounded) by the condition of the artist as heteronymous (subject to external influences and governance) in complex relationships to a range of others including (including funders, commissioning bodies, institutions, ‘stakeholders’, project participants, audience, communities etc) as well as locations and wider political contexts.  (Shannon Jackson, in Social Works (2011), unpacks in more detail the tension between autonomy and heteronomy, and by bringing art theory into more direct contact with feminist theory and practices and her own grounding in theatre studies, fulfils much of what Kester begins.)”

My essay continues by looking at three Bristol based participatory arts projects and makes a good argument for practical ways in which the dialogical aesthetic might help us not only to make better participatory art and performance, but also to raise its status within the art world.  In the conclusion, I wrote

“A critical framework for dialogical arts practice has relevance to the way that we consider the aesthetics of community theatre/performance and offers particular opportunities not available to art that is judged through frameworks that privilege the artist’s autonomy and art-as-object.   The long-embedded ‘normative assumptions’ associated with art theory and criticism have subtly relegated community practices as somehow ‘less-than’ and may detrimentally influence the way that we ‘see’ and judge community theatre… ”

Beyond the advantages to practice and considerations about presenting participatory work, my final assertion is that “…community theatre/performance practice is underpinned by sophisticated, interdisciplinary, creative and social skills worthy of critical respect and acclaim. An ability to adeptly confront and reconstruct out-moded ‘normative assumptions’ that affect the way that aesthetics are expressed and judged within the field may be key to raising the profile of the field both to those within and external to it.”

If you are interested in reading the full essay, please email me or leave a comment below.  Thanks!